Natural diamonds often "hide" in 150 kilometers deep in the earth, and only be formed after billions of years under extremely high pressure and an environment exceeding 1000°C. According to the physicist organization network news, a research team led by the Australian National University and the Royal Melbourne Institute of Technology has shown that as long as high pressure is applied, a diamond similar(Natural diamond and Lonsdaleite) to an engagement ring can be produced in a few minutes in a laboratory at room temperature.

Professor Bradby from the School of Physics Research of the Australian National University said that they designed an experiment in which a small piece of graphite-like carbon is subjected to extremely high shear and high pressure to promote the formation of diamond.

Be different from most previous work done in this area, the researchers did not apply additional high temperatures to the carbon samples during the compression process. They used advanced electron microscopy techniques to find that the resulting sample contained both regular diamonds and lonsdaleite.

In this unprecedented arrangement, the researchers saw a thin diamond "river" (about 200 times smaller than a human hair) surrounded by a Lansdale "sea". This arrangement is reminiscent of the "shear bands" observed in other materials, in which narrow areas are subject to strong local strain. This indicates that shear force is the key to the formation of these diamonds at room temperature.

Including soft black graphite and hard transparent diamond, Carbon atoms can be combined in many ways to form different materials. As everyone knows graphene is the thinnest material ever. There is more than one carbon-based material that has a diamond-like bond.

Lonsdaleite was found naturally in the Diablo Crater site in Arizona, USA. Since then, scientists have synthesized trace amounts of this substance in the laboratory by heating and compressing graphite (using high pressure or explosives). It is predicted that it is 58% harder than natural diamonds, and before this, natural diamonds have been considered the hardest natural material on earth. 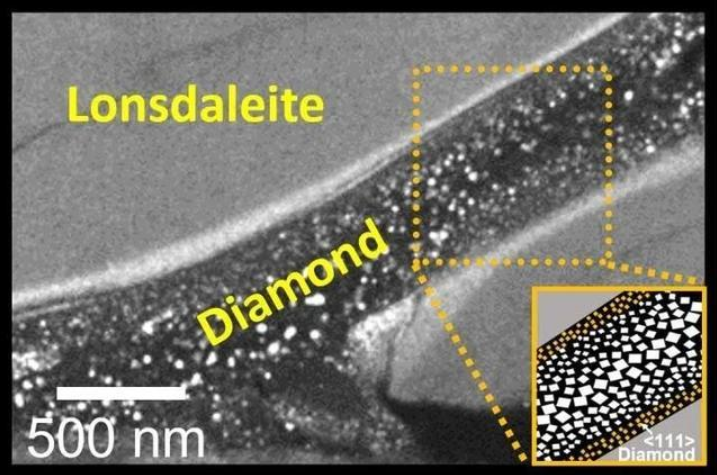 The booming season of diamond manufacturing?

The ability to produce diamonds within minutes at room temperature opens up many manufacturing possibilities.

In particular, for industries that require extremely hard materials, the use of this method to produce lab diamond "harder than diamond" is exciting news. For example, coating drill bits and blades with diamonds can extend the life of these tools.

Researchers said that the next challenge is to reduce the pressure required to made diamonds. In the process of forming diamonds at room temperature this time, the lowest pressure applied was 80 gigapascals, which is equivalent to the weight of 640 African elephants concentrated on the tip of a ballet shoe! And if both diamonds and Lonsdaleites can be manufactured under lower pressure, we can produce more lab grown diamonds at a faster rate and at a lower cost.