Home / News / Gemstone Information / Why You Should Buy a Moissanite jewelry

Why You Should Buy a Moissanite jewelry

To be honest, if you want to look nice, buy moissanite, it's hard enough to look like a real diamond, it's more sparkly and clearer, and it's cheaper. Who cares if it's a natural diamond or a moissanite! Besides, jewellery is all about matching your own personality, so as long as it's beautiful enough to express your own personality If it's beautiful enough to express your personality, you can wear it in any material.

Moissanite diamonds can be matched with gold or silver

Moissanite set in 925 silver plated white gold ring jewellery, according to the quality of the service (PK18K gold actual effect of such) is 200-300 yuan. If with 18K gold, depending on the style generally speaking two thousand up and down, the value is the gold part, call it a piece of jewellery. High quality moissanite (DE colour grade) is not expensive either.

Save money on Moissanite diamonds 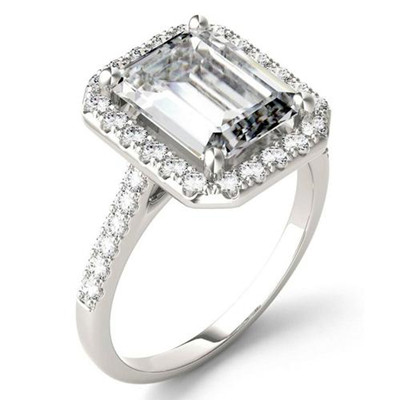 As a piece of jewellery to wear, Moissanite diamonds undoubtedly have many advantages, but if you want to collect and invest in them, you still need to be careful. The Moissanite diamond is an artificial material and as technology develops and production expands, its price will be influenced by the laws of the market and the rarity of natural diamonds. There is still a significant difference in price compared to the rarity of natural diamonds.